You need tologinorregisterto add to your favorites.

Your growing toddler – What to expect beyond 1000 days

Look back at the healthy habits you’ve encouraged, which have helped your toddler grow so far, and look forward to the exciting developments to come.

Your child’s first 1000 days mark the moment she was conceived to her second birthday. In just 1000 more days, she’ll be almost five, and you may be waving her off at the school gates! Congratulations on coming this far. It’s thanks to you and your careful nurturing that she’ll soon be blossoming into a healthy, happy pre-schooler.

A lot has happened during your little one’s first 1000 days. She’s undergone a huge growth spurt—both inside and out. When she was born, her brain was just a quarter of the size of an adult’s brain, but by the time she turns three, it’ll be 80% fully grown! She’ll continue to need healthy fats to support her brain development, so keep offering foods like avocados, eggs, and oily fish, such as salmon.

Nutrition for healthy growth is key during these early years, which is why the arrival of her “milk teeth” is perfectly timed. Expect to see her first molars and canines appear during her second year, and a full set of “milk teeth” by her third birthday. Choking is still a risk before this point, so continue to cut her food up into small, bite-sized pieces.

With such rapid growth in your toddler’s first two years, you might find yourself wondering when it will end! You may have heard that you can estimate how tall she will be as an adult by doubling her height at age two. While this method has been around for a long time, there is no research to show that it is entirely accurate. Instead, a more reliable way to monitor your toddler's growth is to use growth charts.

Some parents believe that the bigger the child the better. However, a big child is not necessarily a healthier child. In fact, some research has shown that higher weight during the early years may continue into childhood. For example, one study showed that a child who is overweight by 18 months of age, had an almost three-times higher risk of being overweight at age six.

Rates of obesity in children and adolescents, in most areas and countries around the world, have increased over the past 40 years. In 2016, 50 million girls and 74 million boys between the ages of 5 and 19 worldwide were obese. This is a significant increase from 1975, when 5 million girls and 6 million boys were obese, making it a global epidemic. Yet it’s not just being too heavy that’s a problem: at the other end of the weight spectrum are the children who are underweight. In 2016, there were 75 million girls and 117 million boys of the same age around the world who were moderately or severely underweight. Although the First 1000 Days Nutrition Programme has focused on healthy growth and preventing children from becoming overweight, being underweight remains a health concern in many regions of the world.

Growth is such an important indicator of overall health, which is why it is measured each time your child visits your healthcare provider. Growth charts are used to map out weight, length, and head circumference for children, and to monitor the changes in these measurements over time. It’s therefore important that you understand how to read them.

Because boys and girls grow at slightly different rates, they each have their own growth charts. When you’re looking at a chart, the focus is on your child's rate of growth as she gets older. Five measurements plotted over time are therefore much more useful than just one, as they show you the rate at which she is growing compared with the curves on the chart. Growth isn’t like grades at school—the goal is not to get an A with a score of 100!

Percentile curves on the chart show where your child’s growth is compared with other children the same age. According to the World Health Organization, an average weight for a 21-month old female toddler is 10.8 kg (23.75lbs). If you plot this on a growth chart, she would be on the 50th percentile, meaning that 50% of girl toddlers her age weigh more and 50% of girls the same age weigh less. If this represents your toddler, continue to follow her length and weight at her wellness checks. If your child's growth is concerning you, speak with your healthcare provider.

If you don't already have a copy of your child's growth charts, blank charts are shown below. You can use these to plot your child’s weight and length from birth until age two. You can then see which percentile your little one has tracked up until now. 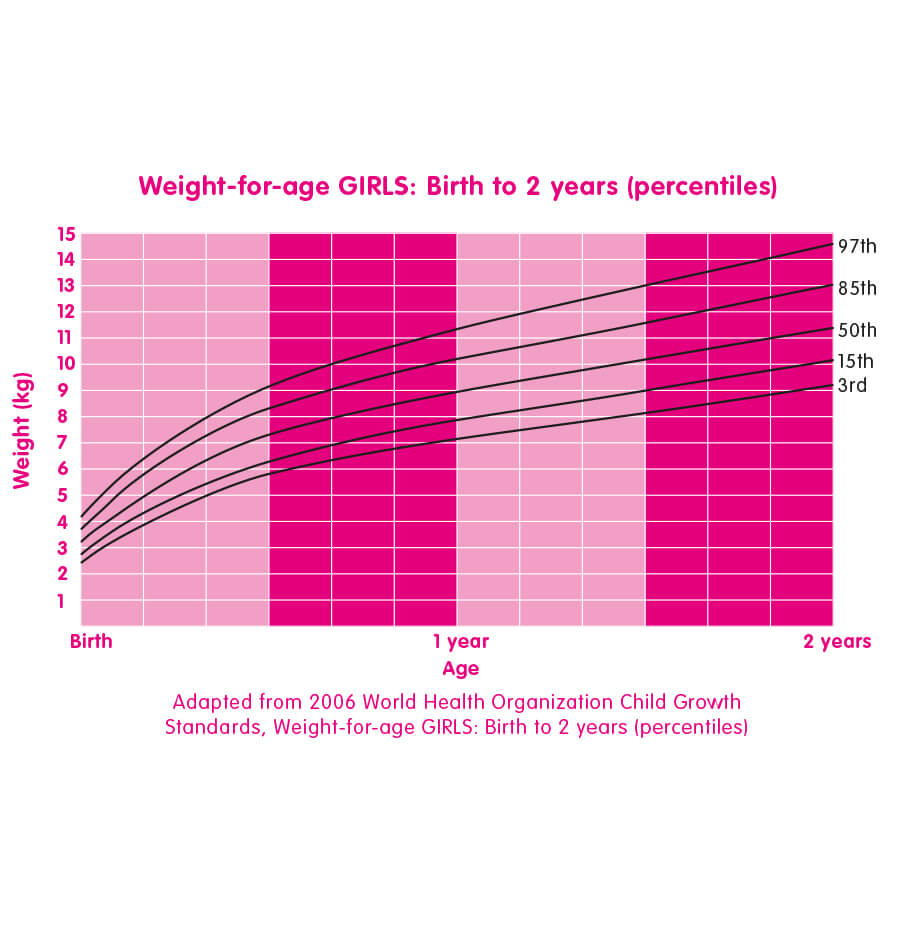 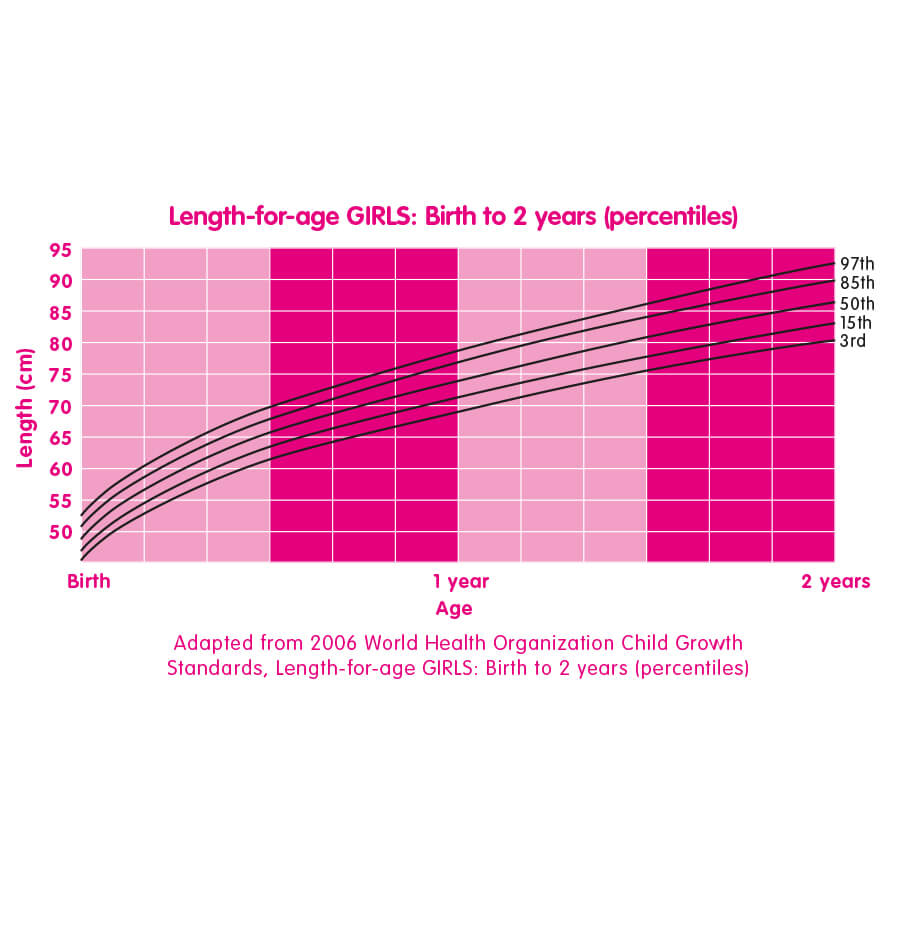 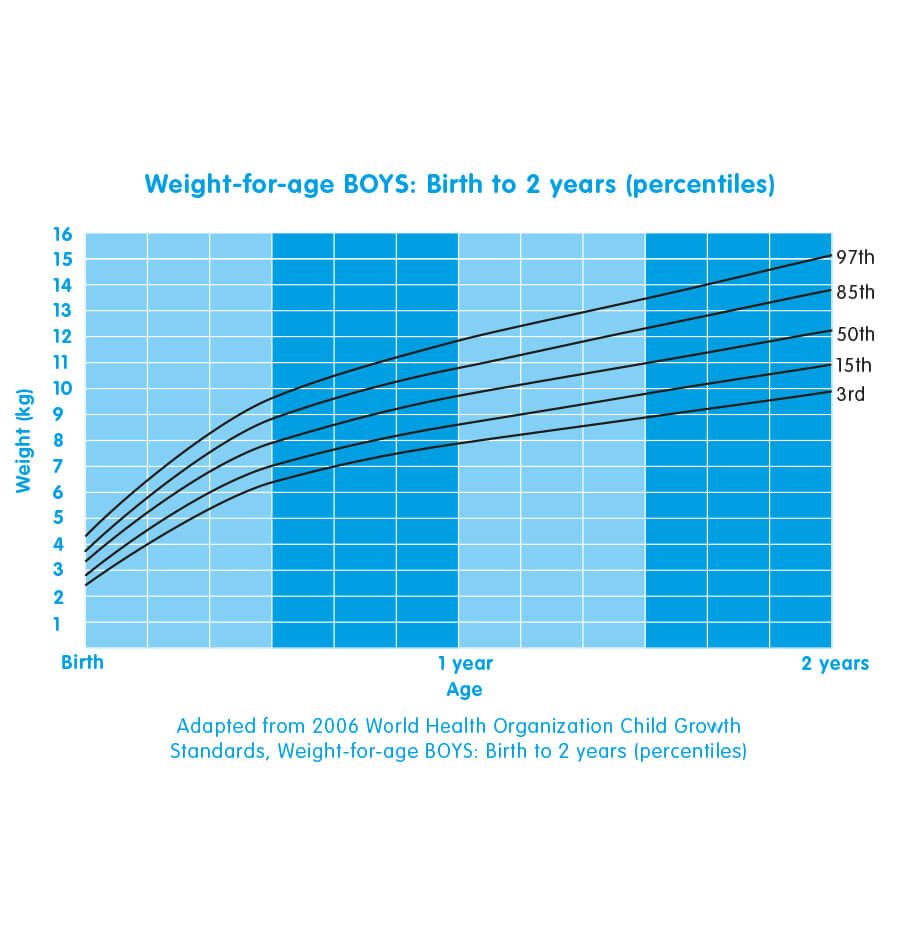 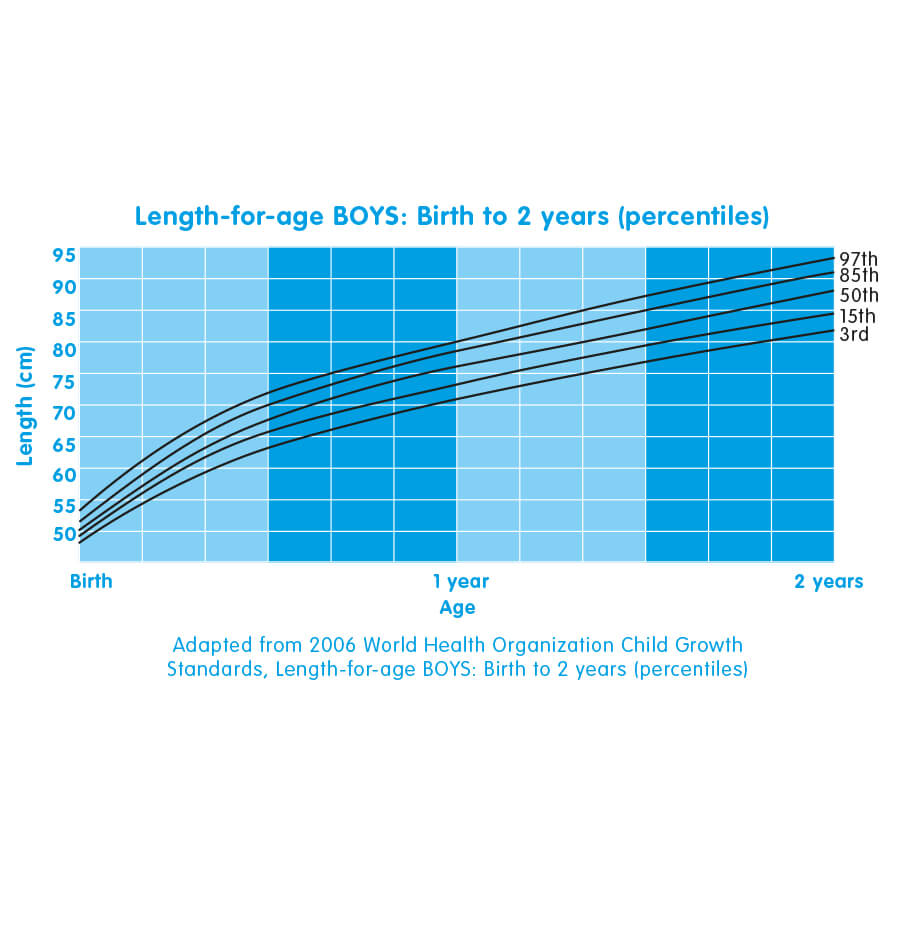 Imagine a two-year-old girl named Amy, whose weight and length have been tracked using the growth charts. Amy has had her measurements regularly plotted on the length-for-age and weight-for-age charts since birth, when she weighed 3.2kg and measured 49cm long. By her first birthday, her weight had increased to 9kg and her length, 74cm. At 18 months, she had steadily grown to 10.2kg and 81cm, and today, she weighs a healthy 11.4kg and measures 86cm in length. Looking at the charts above, this means Amy has consistently tracked at the 50th percentile for both length and weight. Remember that all children are different, and it’s fine for your toddler to be above or below the average 50th percentile, as long as her healthcare provider indicates that she is growing well.

On the right path

As you’ve been following the advice in the First 1000 Days Nutrition Programme, your toddler is likely on track for healthy growth. So well done for giving her the best start in life. Your job now is to continue what you’ve learned into the next 1000 days and beyond. It’s exciting times ahead!

Did you know? By completing the First 1000 Days Nutrition Programme, you’ve learned how to increase your toddler’s chances for healthy growth and development.

How to keep your child calm at the doctor’s

A routine check-up at the doctor’s should be a happy or positive experience for your child.

Myths or Facts: Goat’s Milk as an Alternative Choice for Your Child

A mother’s breastmilk is the perfect, natural source of nutrients for your child. However, goat’s milk has been thought of by many mothers as one of the alternatives for a growing child.

From the moment they’re born, your child has a lot to say.

Activities for your toddler at 18-24 months

Can you believe your little one is almost two years old? Your toddler is changing all the time now and probably already has some favourite games.

Child Screen Time – When to Switch off

Research shows that free play and engaging with you is essential for your child’s speech, sleep, creativity, and brain growth.

Are you looking for a unique birthday cake for your child? Do you want to impress your guests at your child’s birthday party? Here are two mouth-watering recipes from Nestlé.

How to help a picky eater

Wondering how to help a picky eater? Developing a palate takes time. So we’ve prepared a menu of useful tips to help turn your picky eater into a food lover.

Travelling with Your Child

Going away with your little one gives you the opportunity to spend time with your family and enjoy their company.

Could screen time increase the chances of my toddler becoming overweight?

Did you know? Young children risk missing out on important outdoor play and activity when their time is spent watching television and in front of screens.

Planning a one-year-old’s birthday party can be surprisingly tricky.

What to consider when choosing a nursery

Wondering how to pick a nursery to look after your child? We have put together a list of some things to consider when choosing a nursery, from childcare costs to location.

You can do it!

Did you know what is best for your little one?

How to be a confident parent: start today with six easy steps

Becoming a new parent, and bringing your little one home, is the most daunting experience to navigate.

5 fun activities for your one year old

From crawling to standing and taking his first steps, your child is now moving quickly into toddlerhood and becoming more active and mobile all the time.

Lead by example by eating together with your toddler

Did you know? Being a good role model is the most effective way to get your toddler to try new food.

Terrible twos coming up? How to deal with toddler tantrums

Now they’re walking and talking, your toddler’s asserting their independence more and more every day, as well as developing a strong willpower!

Making family trips with your children will leave you with lots of cherished memories. The good thing is, traveling today is so much more family-friendly than 20 years ago.

Find recipes for you and your little one.

We believe that breastfeeding is the best nutritional start for babies and we fully support the World Health Organizations recommendation of exclusive breastfeeding for the first six months of life followed by the introduction of adequate nutritious complementary foods along with sustained breastfeeding for up to two years of age.

Nestlé Start Well & Stay Well is here to share the science based information to support you as a confident parent in giving your child the best possible nutrition.